Went to Taiwan last week to speak on a conference. It’s really great to be invited to do a thing like this. Since I’m not an academic and I don’t have a research department behind me it’s great to do these kinds of lectures, to be able to communicate my views on creativity, on talent and on cities in the first place, but also a great way to learn, to see new cities, to meet other people.

I was invited for a conference in Tainan: the 2012 International Symposium on Cultural Heritage and Cultural Creativity City. Together with other speakers from Japan, the USA, the UK and of course Taiwan we were discussing for three days the experiences on the use of cultural heritage in successful urban regeneration. 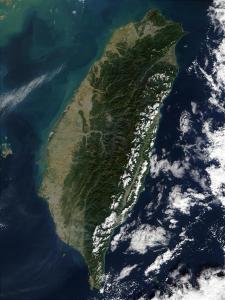 Most people will not know a lot about Taiwan. So, let me first say something about it. The country is lying in the East China Sea, North of the Philippines and South of Japan. Across the Taiwan Strait its only a mere 150 kilometres to main land China. The entire island is just a little bit bigger than Belgium and slightly smaller than the Netherlands. Two-thirds of the island has mountains and is not very suitable for human settlements. The country has a population of more than 23 million people. Which are 7 million more than the Netherlands. It is one of the ten most populated countries in the world. That makes it easy to understand that the one-third of the island that is inhabitable is one big conglomerate of urban settlements. Taipei is the capital and the largest city. The city of Tainan is situated much more to the South and is one of the bigger cities on the island.

Arriving at Taipei airport the High Speed Railway line brings me to Tainan city in less than two hours. My hosts are waiting for me there to bring me to the hotel. From the Shangri La hotel, which is very centrally located I step outside in the warm tropical evening to walk through the streets, look at the shops and the food stands that are everywhere.  Across the street is the University, on the other side the main railway station. That is not the HSL station, for obvious reasons the central government decided to build the HSL on a completely free track. This is why most of the stations (except in Taipei I think) are located far outside the city centres. It is good to know that the Taiwanese are the nicest people you can ever meet, very hospitable, always trying to help you. I was looking for a small restaurant, or a bar, couldn’t find it in this street and decided to eat something in a noodle restaurant. Just by pointing at a bowl that another man was eating the cook understood what I wanted to have. Had a beer in the hotel bar, the real ‘Lost in Translation’ feeling.

The conference was well organized.  Every speaker had enough time to make a good presentation and two commentators. The opening speaker was the mayor of Tainan.  He was also the host of the event, together with the local University. The room was full of people, among them lots of students. I really like that. In my presentation I always try to explain that we should look at the young generation and at what they need to build their lives in your city. Most of the time though you are talking to people in the same age group as myself: above 50, male and grey haired. Not here. 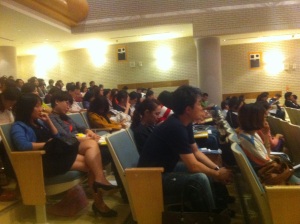 What’s going on here? Why do they have a conference like this? Taiwan is a rich country with a good education system. Different then main land China they do not have to overcome 50 years of communism. That is why they live here because as Nationalists they were the ones that were able to get away. And during all those year they have built a prosperous country. But the industry like everywhere in the western world is declining due to lower wages in China. Even the Taiwanese capitalists replace their production facilities. So the question comes up: what’s next.

This was not the first time for me in Taiwan. I was here there years ago on a meeting of a week, with INTA, discussing the future of Taichung, a big city slightly more to the North. We discussed everything: Politics, economy, food, architecture, tourism, and all the other things there are to discuss. So I knew that my ideas about the creatification of the economy needed some caution. But I started to see that Tainan was a bit different, more cultural. Not easy for an outsider to see.

Listening to all the speeches, sitting in the hotel, having dinner with the hosts, and after that wandering through the city, I started to see that this place scores very high on hospitality and safety. Maybe what is missing is the self-expression you expect to see in a country that wants to transform in a more creative direction. There is not so much one could call heritage. There may be much more knowledge than creativity. But the country is very well connected to the rest of the modern world: its all there, the espresso bars, the Mercedes’s, the BMW’s, the jeans, Armani and Mac Donald’s. 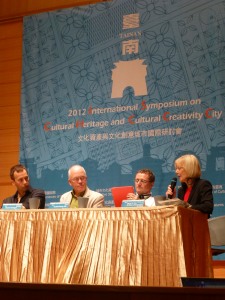 Thinking about main land China and the big transformation that is taking place there today; I started to think this might be what China is going to be, what it is going to look like in the near future. Chinas biggest problem is the shortage on arable land, which accounts for only 14% of that country. This is the main reason they have to go upwards when they want to expand their cities. There simply is not the possibility to lose more arable land when you want to feed 18% of the worlds population. In Taiwan the reason maybe different, there seems to be enough arable land but there is not enough land to build houses for the huge population. So the only way is up. Maybe Taiwan shows us what China will be in twenty or thirty years. Like Hong Kong and Shanghai Taiwan will always be a separate and different part of China. But one way or the other, China it is and will be. It was great to be there and have the opportunity to think about it and to discuss it.